43-year-old Daba is a member of the market garden strip group in the village Djilor 1, located in the district of Fimela. She has eight children : two adult girls, Penda and Sira, and six boys: Seny, Sakou, Djibril, Ousmane, Boucar and Mignane.

Daba’s husband Samba used to farm peanuts, millet and beans and also did some fishing on the side. They relied entirely on these two sources of income. Samba would sell most of the peanuts and give Daba what was left for making the sauce for the daily meal. They would also keep some millet and beans just for domestic consumption. As the family were living near the sea, Samba would also manage to fish a bit, putting some by for the family and selling the rest. These circumstances were quite challenging because the family had no other money coming in, and Samba is quite timid by nature and didn’t like to ask for anyone's help. Matters went from bad to worse when the children fell ill. Sometimes, Daba’s uncle would help her to pay for the prescriptions for the children when she took them to the health centre in Fimela. But sometimes she couldn't even afford to take them to the health centre, and then she’d resort to medicinal herbs or the traditional healer. 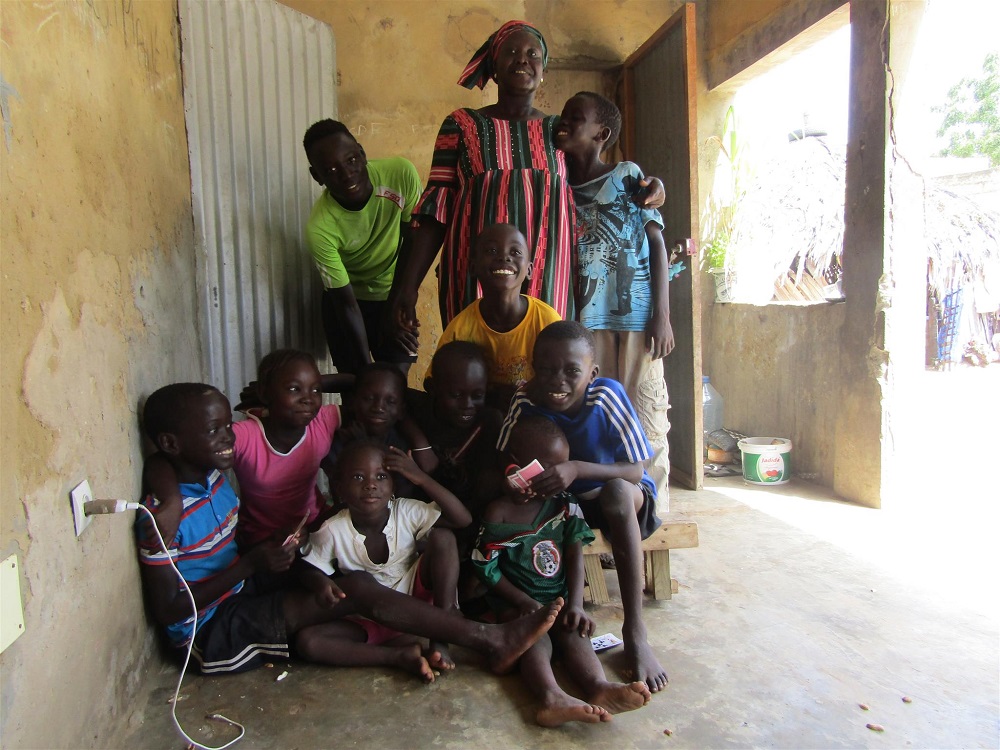 When the lean season came and the family’s few reserves had run out, Daba, Samba and their children survived on help and donations from the people of the village, with their neighbours giving them food whenever they had some spare. The family accepted graciously all offers of assistance. Despite this situation, they did everything possible to keep Djibril, Sakou, Penda, Sira and Seny in school. As it is a public school, they managed at least to pay the children’s tuition fees so they would receive an education. The majority of the children in the village were going to school and Daba and Samba did not want theirs to be left out. Living through this situation took a toll on Samba’s mental health. He could hardly bring himself to speak to Daba at home because of the stress, unable to consistently take care of the family's education needs, health and food.

Stability takes root
But then, as part of a World Vision livelihoods project, the women of the village including Daba received support and equipment in order to develop a strip of land into market gardens. The women formed two groups with a plot each. In 2011, an agent of World Vision Senegal who had been coming out to meet the villagers, put us in touch with the loan agent from World Vision Senegal project Microfinance Enterprise Development (MED) to assist the group with obtaining credit for market gardening.

Through the MED project, Daba received an initial loan of 50,000 XOF ($100) in 2011, repayable over a six-month cycle. With a plot of 25 square meters, she divided the money into two parts: one portion for growing aubergines, peppers, and cabbages and the other for growing onions. During the first three months she harvested 25 kilos each of aubergines, peppers and cabbage, which she sold for a total of 30,000 XOF (60 $). Of this, Daba set aside 15,000 XOF ($30). By the end of the loan cycle she had harvested eight bags of onions with a yield of 60,000 XOF ($120), not counting the profits she earned in the latter three months for the second vegetable season, with a turnover of 90,000 XOF ($180). Daba’s family members were delighted by how the first loan had worked out, especially Samba because he had been the one to encourage Daba to join the market garden strip. By the third cycle of MED Samba's outlook on life began improving, and together the couple began to feel that they could stand on our own two feet, thanks to how Daba’s business was allowing her to contribute to taking care of the family needs.

Daba eventually obtained seven loans with the MED of 50,000 XOF ($100) on six-month cycles, reaching a turnover of 90,000 XOF ($180) at the end of each cycle. Daba was able to completely fund the schooling of her two girls - Sira in the second year of high school and Penda in the first year, down in Fimela about two kilometres from Djilor. On top of the girls’ education, she covered all the family's daily food budget. Daba’s uncle was also very happy to see that the family was making ends meet, particularly when illness struck.

Seeing the way ahead with Vision Fund
When the MED ended and Vision Fund was created, Daba continued working with us. She took out her first loan with VisionFund in 2017 for 150,000 XOF ($300). At that time, Samba had gone to Dakar to find a job so he could do more to take care of the family’s needs. Soon after, their son Boucar was seriously injured in his right eye while playing with his friends. Thanks to the loan Daba had contracted with VisionFund, my business had hit a turnover of 250,000 XOF ($500) and a profit of 100,000 XOF ($200). Daba used this capital straightaway to pay the costs of hospitalising her son. Following the incident with Boucar, Daba obtained two other loans from VisionFund in the same amount of 150,000 XOF ($300) and on the same repayment terms. Knowing what she does now about the business, Daba buys several varieties of seeds and harvests twice per loan cycle, with a cash income of 90% and a turnover of 300,000 XOF ($600). As for loans in kind, Daba now has another market garden patch assigned to her husband.

VisionFund has now granted Daba a fourth loan for 150,000 XOF ($300) on a six-month term. “I want to really thank them as a company because it is down to their loans that my husband and I have been able to take better care of our family's education and health, and guarantee our self-sufficiency in food. We have no regrets about choosing VisionFund as the partner for the development of our business,” says Daba.