“I want to study hard and be a doctor,” says 12 year-old Mg Mg Kyaw, “So that I can treat my grandmother if she falls sick.”

His grandmother, 58 year old Daw San, has been taking care of him and his little sister May Thingyan since their father died when they were very small. Her daughter, their mother, had remarried and was living in the city, leaving the children in her care – a task she works very hard to fulfil.

“I don’t want anyone to look down on them and will take the very best care of them till my last breath,” she says. The family lives in one of the rural villages in Hpa-an, in south Myanmar’s Kayin State.

Daw San’s eyes shine bright when she hears her grandson say he wants to be a doctor. “That’s a very big dream,” she murmurs smiling, adding that he would have to work very hard in school. During the school holidays Mg Mg Kyaw works at the village coffee shop. “I want him to understand how hard it is to earn money. I want him to know that if he is not educated, he will end up having to work hard for others,” she says.

Daw San sells food for a living. Her day starts early, as she has to travel to the market to purchase either fruit or meat. Sometimes she travels by bus and other times her grandson takes her by bicycle. During the fruit season she slices up a variety of fruit, packs it into a basket which she then hoists up on her head, and walks around her village selling it. In the afternoons she sells fritters. Outside the fruit season, she makes barbeque pork sticks. And when the school-term starts she sells noodles at the village school. 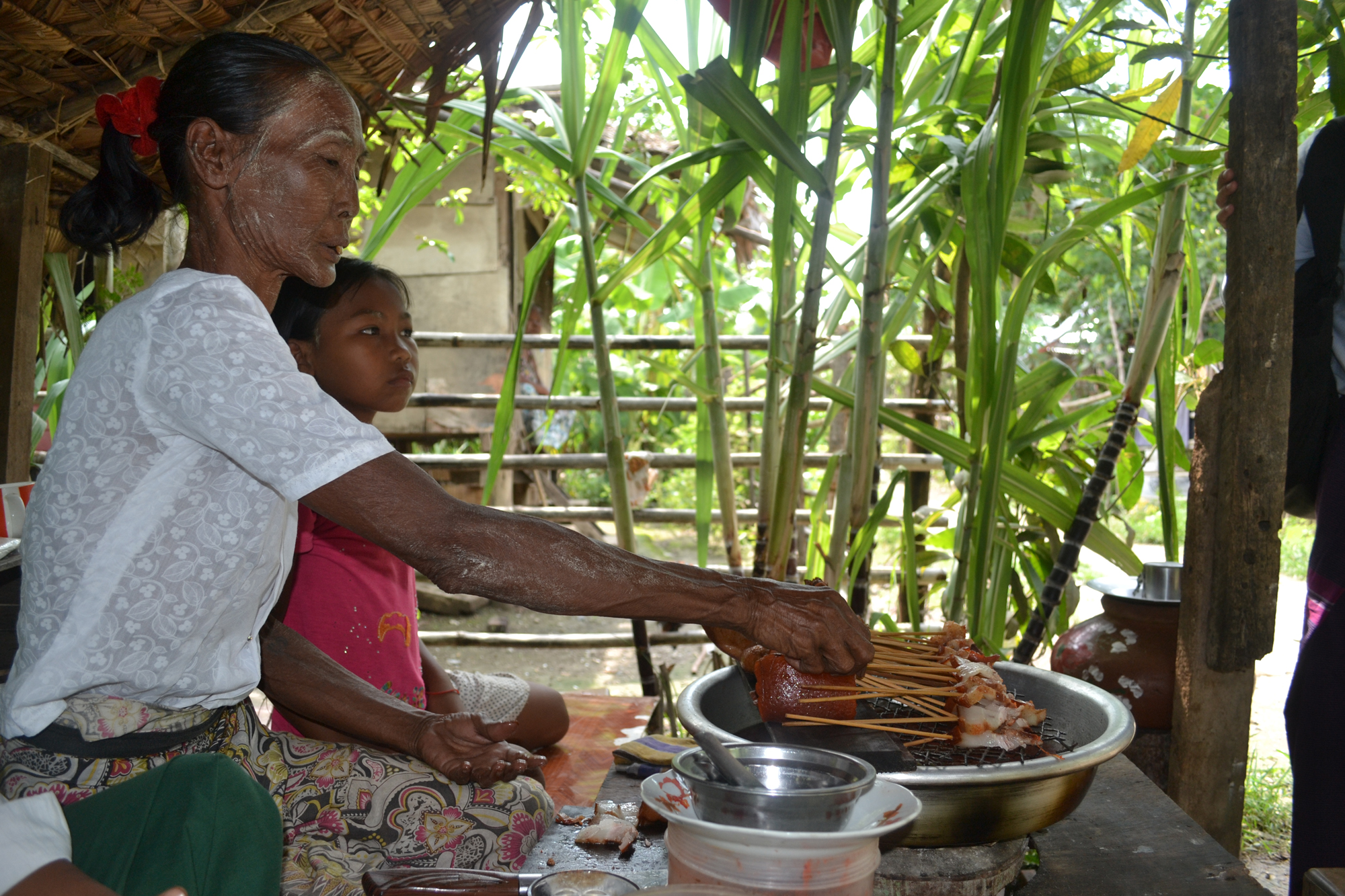 After her husband passed away five-years ago, she had had to borrow money from a neighbour to renovate her house and meet their daily expenses. She worked day and night, but was finding it difficult to manage and felt very bad about not being able to pay back the debt. She was introduced to VisionFund by another neighbour, she spoke to a loan officer about her predicament and found out about a newly-introduced debt-refinancing loan product.

VisionFund’s debt-refinancing loans were introduced with the support of funding from LIFT (the Livelihoods and Food Security Trust Fund) to help families pay-off high-interest charging debts through less-expensive microfinance loans.

Daw San received a debt-refinancing loan of 200,000 kyats ($147) to pay-off her loans amounting to 100,000 kyats ($73) and used the balance to buy food-items for her business. “I feel happy and relaxed now, knowing that I don’t owe the neighbours any money,” she says, “Everything I do now is from my own money and it’s a weight off my chest.”

Through her business, she earns about 5,000 kyat per day ($3.70) and is able to put aside 2000 kyat ($1.5) daily as savings. Her wish is to educate both her grandchildren so that they would not have to live hard lives.

VisionFund’s branch in Hpa-an serves over 3,000 families, and is supported by The Livelihoods and Food Security Trust Fund (LIFT).

The Livelihoods and Food Security Trust Fund (LIFT) is a multi-donor fund established in Myanmar in 2010 to improve the lives and prospects of rural poor people in Myanmar, with generous contributions from Australia, Denmark, the European Union, France, Ireland, Italy, Luxembourg, the Netherlands, New Zealand, Sweden, Switzerland, the United Kingdom and the United States of America. LIFT is managed by UNOPS. LIFT has been working in partnership with VisionFund Myanmar to increase access to affordable and sustainable financial services in four upland states of Myanmar.