Often we meet families who have had to separate in order for one or both parents to find better paying work in an urban centre. This story is about a family who went to Thailand to seek work, but eventually ended up back in Myanmar where they are thriving.

Stories of panic and fleeing being shared in the news reminded us of a family in a rural village in Hpa-an, south Myanmar. 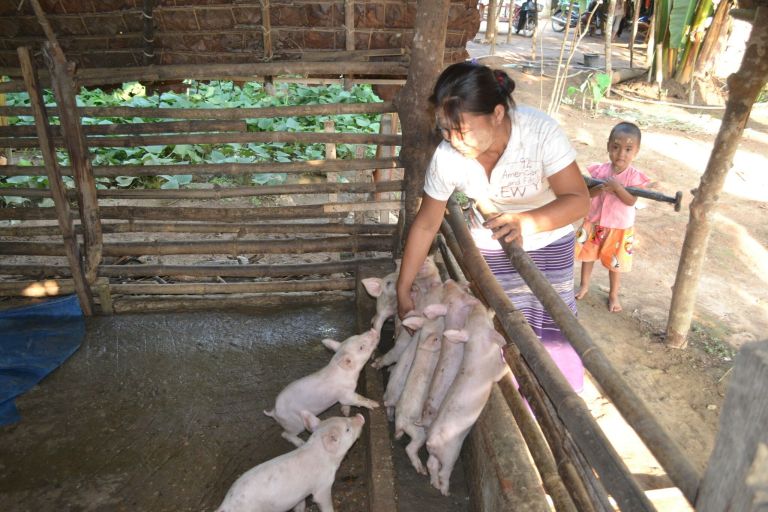 Daw Thaung Nay (46 years) laughs fondly as she feeds a litter of piglets falling over each other to reach her. “They are always hungry,” she says. She also has cows, goats and chickens to feed. Two of their four children are married, and the youngest is still in school. But their lives haven’t always been this peaceful.

Eleven years ago, they had no proper house, produced only a few crops and ran a trishaw business transporting clients in the community. It was the losing battle with poverty that drove them to seek work in Bangkok.

Looking for greater income, U Hla Win and his wife paid 300,000 kyat ($218) each to be secretly transported by car into Thailand. In the bordering areas where security was high, they had to travel through the forest at night by foot.

When they made it to Bangkok, they tried their hand at various jobs including working at a woodwork factory. Some jobs were more difficult than others but it often meant more money.

Their children (aged 13, 11, five and two years at the time) were left back home in Myanmar with their grandparents. Various challenges led the children to quit school and one by one, the three eldest were transported in hiding to Bangkok where they started working at early ages to support the family. 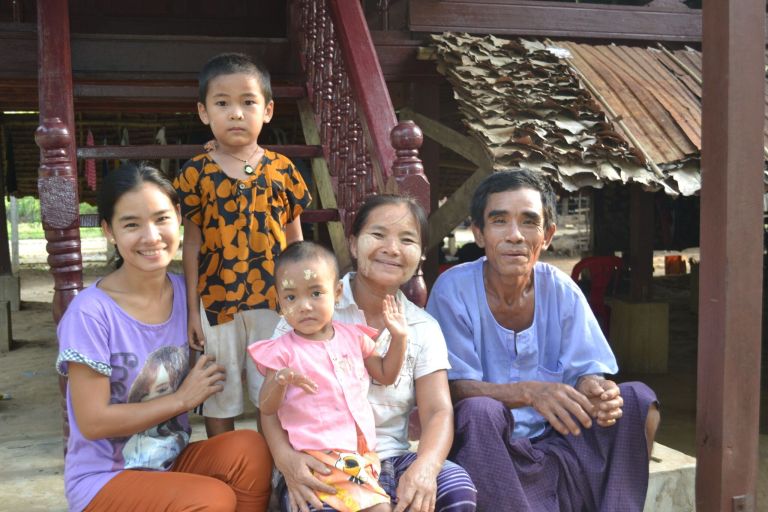 Working without a permit meant more than having to keep a low profile. It meant that it was difficult to access basic services; Daw Thaung Nay recalls the many times she’d been distressed because she was unable to take the children to hospital when they were sick.

Having saved up some money, they returned to Myanmar to start over in 2014. They began to build a house on some inherited land and started small-scale farming. Although they had the land they did not have the means to cultivate all of it, but that changed when they heard about the availability of VisionFund microloans to support agricultural activities.

A VisionFund branch supported by the Livelihoods and Food Security Trust Fund (LIFT) was operating in their village, and they obtained a loan of 300,000 kyats ($218) to buy the fertiliser and seeds they needed to expand cultivation to the full two acres of land they owned.

Since repaying the first loan, they’ve taken three more – to purchase pigs, goats and cows, as well as to support their farming work. “We are happy to be back home, working for ourselves on our own terms, “says Daw Thaung Nay.